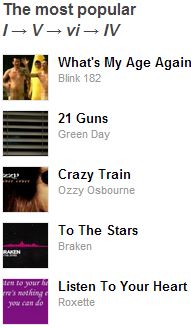 Today’s pop songs are often criticized because of their bland, boring and unoriginal lyrics and melodies. But is that really the case? And more importantly: if it is, why do we put up with it?

Songs by the dozen

As I mentioned earlier, the human brain is a wonderful thing. It is capable of decoding all of the information around us at an astounding rate. A daunting task! Lets give our brains a break shall we? Lets give it some more enjoyable data to process:

Remember all those great pop songs? Frighteningly similar aren’t they?


The amazing people at Hooktheory analyzed 1300 songs and found that we do favor certain “sounds” above others.  This popular “I V vi IV” chord progression can be found in thousands of songs because it feels natural to us. We don’t know why, we just like it a lot!

I know, (over-)analyzing music is wrong. But there are some lessons to be learned. Indeed, for once pop culture might actually learn us something! 😉 As chaotic as we might seem in our decision-making, there are a lot of patterns going on inside our heads. Understanding how the human brain, body or society work is ultimately down to finding and explaining these patterns.

PS Be sure to try their interactive database!